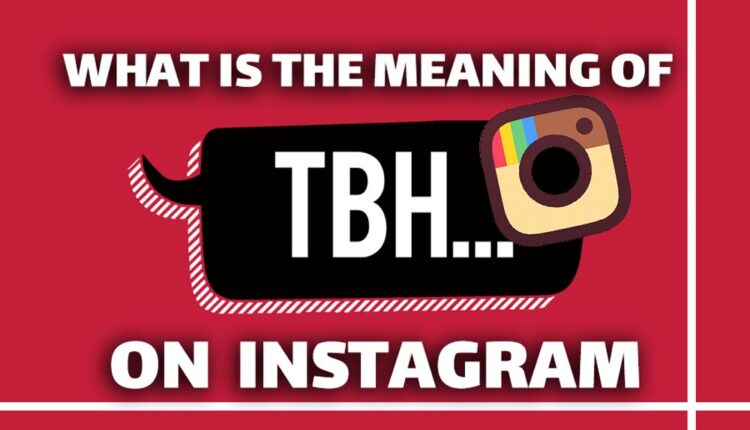 Instagram is one of the most beloved social media apps among people. It has over 1 billion active users in a month.

Instagram is a popular choice for the app among teens and adults. If you constantly use Instagram for messaging and interaction with other people, you must have seen texts such as TBH, DM, FOMO, LMK, and many others.

These words are used habitually in teens’ texting, captions, and stories. What do these words mean?

They are actually prevalent slang used during texting to make the long text short and type faster and easier. For instance, TBH means “To Be Honest.”

TBH means, To Be Honest; it’s an idiom used by social media users to describe their opinions honestly. It can also be used when somebody changes their decisions in a conversation.

This term mostly refers to positive opinions and thoughts, although there might also be negative opinions about one specific thing. TBH is mainly used to warrant that a person shows their feelings frankly and 100% honesty.

It should be written in all caps like TBH and not tbh or Tbh, but teens sometimes do not pay attention to this rule and write tbh.

This is widely used during texting, especially on social media and Instagram. Teens use this word often in their comments and stories. If you want to know the exact usage, check out the example below:

Does TBH have other meanings?

Over time and after social media became universal and apps like Instagram went viral, the meaning of some phrases has changed.

Although the meaning of TBH is “To Be Honest” or sometimes “To Be Heard,” there are some other uses of this work. For example, in one case, a user uses this word in a way to get more likes and comments. In other words, it uppers his engagement rate.

The user posted ‘Like all my posts for a tbh, and then comment “done” when you are finished,’ and the followers start liking and commenting.

With this idea, the user increased the engagement rate, as eating an apple pie.

In the same way, TBH is used to start a conversation with Instagram users who you don’t know exactly.

Look at the example here: you won’t DM someone or reply to their stories just randomly when you don’t know them, or you are not that close, but if you give them a TBH, the conversation will start significantly. Well, give it a try when you want to start a conversation with your crush on Instagram, and you won’t regret it. So many teenagers have done it, so it is a tested way of replying to your crush’s stories.

In some other cases, TBH is used to ask to rate for something, ‘TBH and Rate.’ teens and some adults use this rather than writing 2 or more lines in their caption.

Their followers choose to score them with a number. For example, they score their new photography, outfit, or anything else.

TBH, there is no limitation to using this kind of word. You can be creative and create slang under your captions, and the more people like it, the better your insights and engagement rate will be.

People use so many acronyms and idioms on Instagram while DMing, creating a caption for their posts, or making a call to action (CTA).

You might see this acronym when using social media, so it is better to know its meanings and use them properly.

We mention some of them, so you can use them in your own way:

There are thousands of these acronyms that you might face in exploring Instagram and, generally, social media. They are easy to use and make the response faster. Also, the slang makes our sentences shorter. This is good for apps like Instagram and Twitter and others that the character of the caption matters, and it shouldn’t belong.

This was just an example of the effects of social media, especially Instagram, on our daily lives and how we start a conversation.

Knowing these slang and acronyms makes us write better comments or make better conversations on Instagram.

Here, “TBH” was just an example. As you know, and we mentioned, there is a lot to learn.

If you know any other acronym we didn’t mention, please share it with us in the comment section.

We will add them to this category. And if you don’t know their usages, ask us in the comment, we will be HTH!

Hi, I'm Elizabeth, a translate and content creator. On this website, we try to explain everything about tutorials, tips, and tricks on using Instagram. Also, you can read it entirely and ask any questions from us, or if you have problems, contact us and leave comments, and we will reply as soon as. Sign up for our email newsletter to stay in touch with our Team.