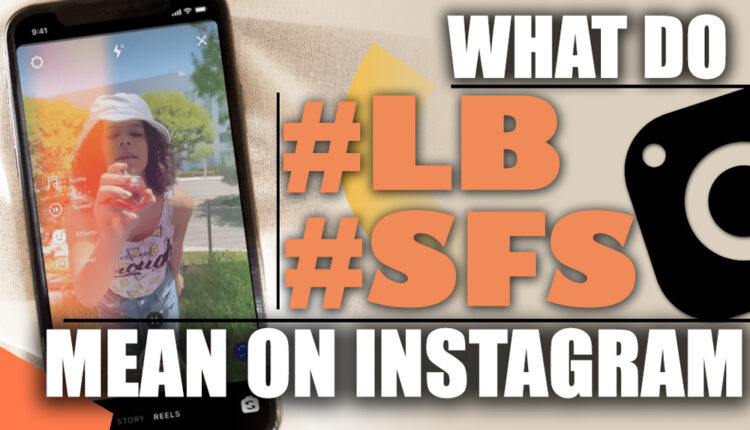 Since social media and platforms like Instagram, Snapchat, and others have been viral, some words and acronyms have been invented by its users to communicate better and faster.

There are some acronyms that users use to send a kind of message to their followers. “SFS” and “LB” are 2 of them. Of course, they are not just used on Instagram; they are used on other platforms like Snapchat and other social media.

In the next part, we will tell you what they mean and how to use them on your posts or stories to give your followers some hidden messages!

No, I was just kidding!

Most of the users know their meanings, which will lead to better communication. Suppose you see the hashtag #SFS on Instagram and Snapchat and wonder what it means! In this part, you will get your answer!

The acronym SFS has 3 meanings, which are all the same and used in a similar situation. SFS stands for “Shoutout for Shoutout,” “Spam for Spam,” and “Snap for Snap.”

It is kind of an exchange between the users. One user will tag another in their post to invite their followers to the other’s page; the point is boosting their follower counts.

This is a way of promotion, and sometimes influencers and even regular users who are seeking to have more followers do that. So on the other side, other users have to do the same act in favor.

How can you use the SFS hashtag? But don’t forget that you need to do the same for your followers. Other hashtags and acronyms that are used in the same way are #L4L “like for like,” and #F4F “follow for following.” you can also share your stories with the same hashtag.

This popular hashtag also works on Snapchat, and things work exactly the same way. Influencers post shoutouts in their snaps and Stories.

Since when is, has it been viral?

The word “shoutout” has always been used to say hello on the radio, in the past and in recent decades in clubs or concerts. And now it has evolved by the users on social media as a term for a promotion. As you can guess, it is another term for asking for more interaction on Instagram. This is the acronym for the “like back” on Instagram. It is a request from the users on Instagram to get more likes and potentially increase their engagement rate and followers.

How can you use the “LB” hashtag?

It is so simple first; you need to like users’ posts as many as possible, then comment a #LB on one of their posts. The next step is waiting for the user! They might like back or ignore it if they don’t get mad! This is the way it is.

Keep these points in mind:

Some users might ask for LB on the celebrities’ posts in the comment section, and if the number of getting this comment goes up, they might get spam! It has happened for Kylie Jenner, and she really got mad at the time.

Using acronyms, like LB: Like Back or SFS: Shout for shout, can be a great way to boost your engagement rate and the number of followers. It leads to more interaction and receiving more likes and comments on Instagram.

But don’t forget the spam! And don’t overdo it on your or others’ posts. There are so many acronyms that followers use on Instagram to increase their interaction, send messages, and communicate with others.

We had talked about one of the common ones, which is the meaning of TBH on Instagram. If you are interested, you can check this paper.

How Can You Delete Instagram Chat from Both Sides? (iPhone & Android)

Instagram Authentication Apps: Use Third-Party Apps to Set Up 2FA