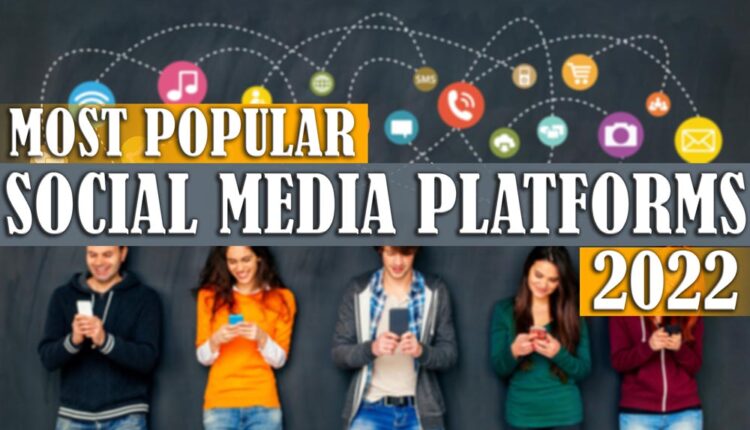 In this paper, we want to take a look at the most used and popular social media platforms. Our need and interest in social media reveal more clearly as our life goes on.

Our life, work, and relationships are somehow related to these apps. So it is worth talking about them and knowing the most popular ones.

We have almost 4.55 billion social media users worldwide. This number goes up day by day, and it is undeniable. And as you know, there are so many social applications exist, and they are all trying to get more users by providing handy features and valuable updates.

Here, we want to talk about the most popular social media platforms. You might guess some of them already. So let’s get started. If you are a business owner or a social marketer and want to know which platform to choose and start your activity, you might need this information.

The following section mentions the most popular social application in 2022.

As you might already guess, Facebook is the most popular app worldwide. Facebook is a social application; it has changed the use of the internet and the way people connect.

As Meta Company has announced, they want to change it even more and use AR/VR technology on their platform shortly.

From 2004 till now, Facebook has had 2.74 Billion Active Users, and it hasn’t stopped a single day. It is like 6 new users per second! This is a considerable number.

This platform is also popular among 12 to 34 users all around the world.

YouTube has 2.29 billion active users, and this is a super-imposing number.

This platform is not only the world’s leading video-sharing forum, but also these all happened only 16 months after YouTube’s official launch in 2006.

3 countries use the most traffic of this popular platform: the United States, India is in the second place, and Japan in the third place. The world’s most popular photo-sharing app has near 1.5 billion global active users. Kevin Systrom founded Instagram in 2009, but in April 2012, Facebook acquired this application same as WhatsApp.

Users use this application for their business, marketing, and also personal stuff. The US and India have 2 most active users among the other countries.

The engagement rate, encourages the business and brand owners to be active on this platform, and marketers have a special look on this forum.

WhatsApp has founded by two former Yahoo employees in 2009, and it is an instant messaging (IM) app. Users, besides texting, can also use voice calling and video calling, which in the new updates has become smoother.

Facebook acquired WhatsApp for $19 billion in 2014. And nowadays, this platform has over 2 billion users.

Facebook has reported that over 40 million businesses use Messenger to interact with their customers. There is an interesting fact about this platform. In the United States, users are more likely to use Messenger rather than WhatsApp for their business and regular chats. If we want to talk about a sudden success for an app, we can mention TikTok!

TikTok is a video-sharing platform, and it launched in 2017 for iOS and Android; however, it became available worldwide in August 2018.

It is a Chinese IM social media platform. Although the first releasing was in 2011, it went viral in 2018 with 1 billion active users.

WeChat has many Features similar to Snapchat. Users can text, send a voice message, and share their locations, besides the other feature that this platform provides for its users.

Telegram, this popular app, is a cloud-based instant messaging. It was launched in 2013 for iOS users and a couple of months later for Android ones.

Telegram had 500 million monthly active users till 2021, and it was the most downloaded app in the same year. Users’ uploads on this platform are only visible for a short time before being erased Forever. This has attracted a younger generation of mobile internet users. Snapchat is also a photo and video-sharing platform launched in March 2013.

Pinterest is an image-sharing platform that has a growth in 2021. It has 100 million active users in the same year.

This platform has more female users. Pinterest has 60% female and 40% male users worldwide.

Reddit is the oldest app on this list, and it was founded in 2005. Although the platform looks like old school apps and the room, it remains its users’ growth and is surprising.

Most users are from America, the UK, Canada, and Australia. There are over 2.2 million users on Reddit. These are the most prevalent social media platforms that users use almost daily. But as you know, this list is not limited. These are simply some of the applications that people primarily use.

Some of these platforms are better for a group of marketers and some for others. They all have their target audiences, so they have specific users.

If you are looking for the most suitable app for your goals, you have to know that different platforms have different features that make specific goals.

Again, this is an unlimited list, and the world of applications is so huge and vast.

Which of these social platforms do you use the most? Which one more benefits to your work?

When Does Instagram Pay You For Reels? +The Number Of Views To Earn a Bonus